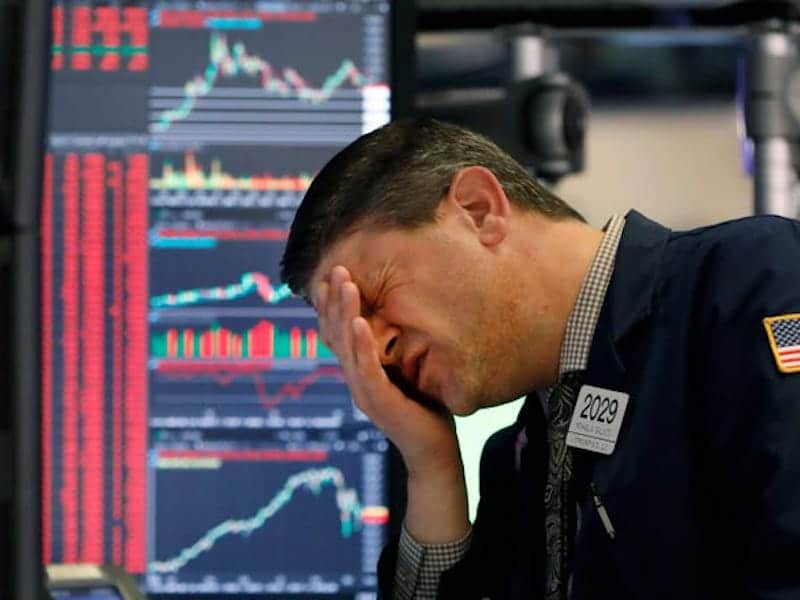 A cascade of unnerving news cast a shadow over financial markets and the economy late Wednesday after a prime-time address by President Donald Trump failed to quell concerns about how the government would soften the economic blow of the coronavirus pandemic.

Adding to the gloom was the NBA’s announcement that it would suspend the rest of its season. Even the news out of Hollywood turned dark as Tom Hanks, the everyman hero of American film, said he tested positive for the virus.

Dow futures tumbled more than 1,000 points after Trump announced in a nationally televised address that all travel from Europe to the U.S. is banned for 30 days to limit the spread of the coronavirus.

Investors also may have been disappointed by Trump’s proposed economic stimulus, an analyst says.

Trump’s speech came amid a flurry of negative headlines late Wednesday. The NBA suspended its season after a player tested positive for coronavirus. The NCAA said it would hold its men’s and women’s basketball tournaments without fans. And the Dow Jones Industrial Average ended its historic 11-year bull run by falling into a bear market.

In his speech Wednesday, Trump also said he planned to take emergency action to provide financial relief to workers who are quarantined or caring for others with coronavirus.

And he said he is instructing the Small Business Administration to provide capital and loans to businesses affected by the pandemic. The president added he would ordert the Treasury Department to “defer tax payments” without interest or penalties for “certain individuals and businesses negatively impacted.” He said the moves would add $200 billion in liquidity to the economy.

He called on Congress to provide Americans with “immediate payroll tax relief” and implored lawmakers to “consider this very strongly” despite bipartisan pushback the idea received Wednesday.

But the blueprint may have fallen short of investors’ hopes, helping send stock futures lower.

The travel constraints, meanwhile, add to the pain the industry has endured in recent weeks.

The International Air Transport Association, which represents global airlines, last week boosted its estimates of the global financial hit from COVID-19 from $29.3 billion to between $63 billion and $113 billion as the bookings falloff has spread beyond Asia.

Unlike during the 2007-09 recession, which hurt business travel more than vacation travel, the drop in bookings is broad, Delta executives said Tuesday during a Wall Street aviation conference.

“This clearly is not an economic event,” Delta CEO Ed Bastian said. “This is a fear event probably more akin to 9/11 than what we saw in (the recession in) 2009.”

Also at risk is the cruise industry, which has been one of the hot spots of virus outbreaks. Cruise companies had a $52 billion impact on the U.S. economy in 2018, up 10% from 2016, the Cruise Lines International Association, a trade group, reported last year. Cruise ships carried 12.68 million U.S. passengers, supported more than 400,000 jobs and paid $23 billion in wages.

The travel ban announced by Trump, and the NBA’s decision Wednesday to suspend the rest of its season, also could augur a sharper-than-expected pullback in household consumption.

Scott Kaplan, a Ph.D. candidate at University of California, Berkeley, who has studied the economic impact of the NBA, estimates the league’s potential loss of revenue could be $1 billion to $2 billion. But he added the impact would be mitigated if the games are played at a later date. Still, he said, employees who work in the arenas could be affected, along with neighboring businesses, bars and restaurants where the games are broadcast.

There could be an added toll on TV networks, which will have to find replacement programming, Kaplan said.

Even before the NBA news, San Francisco Mayor London Breed had announced a ban on all events larger than 1,000 people, canceling upcoming Celine Dion and Billie Eilish concerts as well as basketball games. The news from the NBA cast an even wider pall over the bars and restaurants that surround the Chase Center, where the Golden State Warriors play.

“This has affected our business significantly,” said Cole Barrett, manager of the Mission Rock Resort, a waterfront restaurant across the street from the Chase Center. “We are committed to our team. This isn’t a summer job for people. This is their livelihood. This is how they pay rent and their bills. We are doing our best to keep our doors open.”

“In order for the economy to grow, people have to spend money,” Sarhan says. “If no one is going out and spending money, businesses will have to close their doors, and then they’ll lay off employees.”

Global stock markets and crude prices were pummeled overnight, extending a recent sell-off that reflected alarm over the mounting economic fallout from the coronavirus.