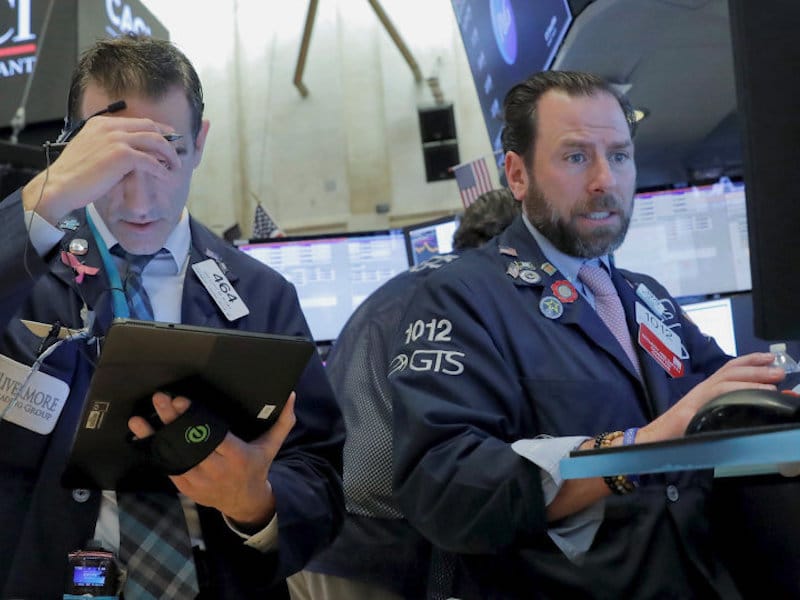 U.S. stocks dropped sharply Wednesday as investors anxious about the economic fallout from the coronavirus pandemic endured another day of tumultuous trading.

Wednesday’s losses were broad, with 29 of the 30 stocks in the Dow suffering losses and all 11 sectors of the S&P falling at least 3%

The declines accelerated midday after the World Health Organization declared the new coronavirus a pandemic and said it is “deeply concerned” by the “spread and severity” of the virus and by “alarming levels of inaction.”

The session continued a volatile week that saw stocks plunge Monday only to recover much of their losses Tuesday. A closely watched measure of turbulence in U.S. stocks, the Cboe Volatility Index, was near its highest level in a year.

“We continue to see the day-to-day flow of news really exhibiting itself in extreme volatility,” said Jim Baird, chief investment officer at Plante Moran Financial Advisors. “It’s a whole host of things that are really coming together to put investors in a pretty cautionary stance at this point.”

The Dow industrials were dragged lower by Boeing, which was down 13% after reporting 46 canceled jet orders for February, including 11 737 MAX planes for Air Canada.

Markets are now poised to see if countries and central banks would follow the U.K. ‘s lead.

The number of coronavirus cases in the U.S. topped 1,000, while China reported an increase in infections imported from abroad, highlighting the challenges authorities face in containing the epidemic. New York set up the country’s first “containment area” around one of the largest clusters of cases in the nation.

Brent crude, the global benchmark for oil prices, dropped 2.5% to $36.28 a barrel. Saudi Arabia unveiled plans Wednesday to increase its production levels even further days after it instigated a price war with Russia.

In his first remarks since Monday’s deep markets decline, billionaire investor Warren Buffett said the selloff wasn’t as bad as some other famous moments in history, such as in October 1987 or during the financial crisis.

“The combination, actually, of the coronavirus and what happened with oil over the week. I mean, that is—that’s a big one-two punch,” said Mr. Buffett in an interview with Yahoo Finance.

European stocks drifted lower Wednesday, shedding much of the gains posted in the morning after an unexpected rate cut by the Bank of England. The easing of monetary policy in the U.K. came with other measures to support the economy, including cheaper borrowing for small businesses.

The BOE made its move just over a week after the Federal Reserve cut its key interest rate. The European Central Bank is expected to ease policy Thursday as authorities take steps to shield economic growth from the impact of the epidemic as business activity and travel is curtailed.

“The U.K. was the first example of truly coordinated action from the central bank and the Treasury,” said James Smith, developed markets economist at ING Bank. Markets are now poised to see if countries and central banks would follow the U.K. ‘s lead. “The Fed will be under a lot of pressure with rates so low elsewhere,” Mr. Smith said.

The yield on 10-year U.S. Treasurys rose to 0.814%, from 0.743% on Tuesday. Bond yields, which move inversely to prices, have careened in recent days: the widely watched benchmark tumbled to a record intraday trough near 0.4% on Monday as investors sold off equities and raced for the shelter of government bonds.

In the Asia-Pacific region, major markets reflected investors’ continued concerns about global growth prospects. Japan’s Nikkei 225 index declined 2.3% to close at its lowest level since December 2018. Australia’s S&P/ASX 200 dropped 3.6% to enter a bear market, typically defined as a decline of at least 20% from a recent peak.

“It’s too early to call this stabilization, and it’s too early to position for a rebound here,” said Mayank Mishra, a global macro strategist at Standard Chartered Bank in Singapore. “Financial markets will continue to focus on the economic implications from the virus, and right now the global outlook for growth is not rosy.”